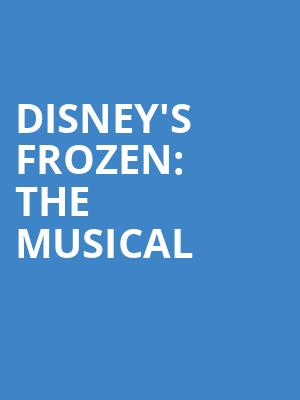 All logos, graphics and images are property of Disney Theatricals

The characters are lovable, the concept is clever and the icy CGI landscapes have a magical Nordic beauty about them. Its Oscar-winning big song... is Disney's best in years.

Why See Disney's Frozen: The Musical?

The Magic of Frozen, in real life!

Let it go! Disney's latest Broadway smash hit is heading out on tour! Following a storming success on Broadway, and earning three Tony nomination in the process, Elsa, Anna, Olaf and Kristoff head out across North America to bring the magic of Frozen to you!

Brought to life by Oscar-winning composer and lyric team Kristen Anderson-Lopez and Robert Lopez, the production received critical acclaim on Broadway for the soaring score and dramatic and beautiful stagecraft. Garnering the Tony nominee for Best Musical in 2018 the stage musical harnesses the fun, love, and wow-factor of the 2013 movie in all its glory, and then adds some!

What is Frozen About?

Loosely based on Hans Christian Anderson's fairytale The Snow Queen, the story takes place in the Scandinavian surrounds of Arendelle, where two royal sisters, Elsa and Anna must grow up alone after losing their parents in a tragic sea accident.

Elsa, the elder of the two must also contend with a secret - she has the power to create ice and snow with her bare hands, which she must keep secret, even from her sister, who nearly died whilst playing together as little girls. Anna, by contrast, is a sunny, albeit naive young lady who yearns for the outside world, having been isolated from Elsa since the accident.

When Elsa comes of age, she must take the throne as Queen, and the kingdom is reopened for her coronation - just for one day. Anna meets a handsome and charming Prince called Hans, who she instantly wishes to marry, much to Elsa's consternation. When the argument inadvertently reveals Elsa's powers, she flees to the wild North Mountain to live out a life of solitude and freedom. But Anna must find her sister and bring her back (with the help of an ice-seller, his reindeer and a talking snowman), otherwise, the fate of Arendelle will be frozen forever, and left to the mercy of a cruel power.

THE MUSIC THAT YOU LOVE

With the original songs from the movie including "Do You Want To Make A Snowman?", "In Summer", "The First Time In Forever" and of course the iconic "Let It Go" alongside new ones penned just for the musical, we can safely say that Frozen fans will not be disappointed. But that's not all... as you're seeing the magical musical on tour you'll also be treated to a brand new, never before heard, duet between Anna and Elsa called "I Can't Lose You"!

Two hours long with one intermission

You may be required to wear a mask during this performance. Please contact the venue directly for more information.

I went expecting a kid show. I left amazed at one of the best productions... more

Sound good to you? Share this page on social media and let your friends know about Disney's Frozen: The Musical at Steven Tanger Center for the Performing Arts.