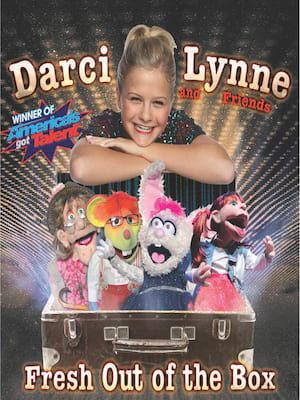 Darci Lynne has a stunning career ahead of her!

Comedy & Stand-upTheatre for Kids and Families

fresh out the box tour

Pint-sized performer Darci Lynne introduced the world to her best friend Petunia and her incredible ventriloquist talent when she first auditioned for the twelfth season of America's Got Talent. Together with her puppet partner-in-crime Petunia, Darci had TV audiences across America in stitches with her cute, wholesome comedy routine, going on to become the youngest contest ever to win the talent contest in September 2017.

After her first official show selling out in six minutes, the dynamic young star is heading out on the Fresh Out The Box Tour. She'll, of course, be bringing along a host of colorful puppet characters including Petunia the diva-in-training rabbit, Oscar the Motown mouse, Edna Doorknocker the sassy old lady and Nigel the erudite British bird, amongst others! To top it off Darci has a knockout singing voice, so there'll be gags, musical numbers and a whole lot of on-stage hijinks.

Sound good to you? Share this page on social media and let your friends know about Darci Lynne at Steven Tanger Center for the Arts.